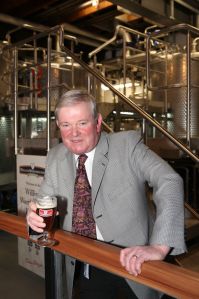 Steve Wellington is a legend. He’s the man who saved Worthington White Shield, that peerless tipple among British bottle-conditioned beers. He brought Worthington E, Imperial Stout and Barley Wine back from the dead. He practiced what he preached in the micro-brewery that was, no, is, the heart of the National Brewery Centre, situated very improbably in the  industrial wasteland that is the Molson Coors brewery in Burton on Trent. He is a genial, convivial man, generous with his time, passion and expertise, and now he is retiring. It seems a pity that brewing should lose such a doughty champion, but I have no doubt that he deserves the time and leisure to sink the odd pint in peace.

A few years ago I had the happy experience of meeting Steve at the National Brewery Centre. Here is the article I wrote at the time. It appeared in the Guardian in 2007.

‘It is miraculous. There is the gleaming, sprawling mass of Coors’ state-of-the-art brewery which looks more like an oil refinery than anything else. And there, to one side, in the Museum of Brewing, is the Worthington White Shield Brewery, a classic arrangement of copper mashing tuns and fermenting vessels, wooden floors and wooden joists, and even an old-fashioned hoist used to lift the sacks of malts. It’s like coming across the Koh-i-noor diamond in a box of theatrical paste jewelery.

Let me explain a little about White Shield, and why it stands so high in the opinion of proper beer drinkers. You can rattle on about its distinguished history (it was first brewed in 1829), its status as a classic IPA (India Pale Ale because it was brewed for our boys in India), its ABV (5.6%) and the rest, but the real reason why I will have a bottle of White Shield with me in my coffin is because, during brewing’s Dark Ages of the late 60s and early 70s, when breweries, with a few honourable exceptions, turned their faces against tradition, diversity, quality and pleasure, and went the way of keg bitters and lagering, White Shield kept alive the flame of decent drinking.

Steve Wellington’s hand held steady as he poured a fine, golden stream of Worthington White Shield into the glass. It was just as well – he brewed it. “It was first brewed by Worthington’s in Burton,” he said. “When it comes to brewing, Burton’s a special place. The water’s like Epsom salts, full of magnesium sulphates and calcium. That makes it very hard and helps give Burton beers their unique character. You liked that? Now, how about trying the Worthington E?”

I blanched. “No, no,” said Steve. “Originally it wasn’t the rubbish it became.” So we had a half of E. It wasn’t half bad.

“Then Worthington joined up with Bass. For a while Bass went on brewing White Shield at Burton, but then moved to Sheffield, and then to Birmingham, and finally they sold it to King & Barnes in Kent, and it was brewed down there for a while. But it wasn’t really working, and White Shield was going to disappear.”

Steve’s a large, bluff man, with an easy laugh and open mind. He’s been in brewing all his life. In fact, he started out making White Shield for Bass in Burton – “270 barrels a week in 1965”. He left Bass to set up a firm telling people how to brew at home and supplying them with the kit. “The home-brewing business went tits-up, but I was very lucky. Bass asked me to run the micro-brewery as part of the Brewing Museum in Burton – that was in 1994. And I thought, what’s the point in a micro-brewery that doesn’t brew anything? So I began brewing some beers Burton had lost: Worthington E, Imperial Stout, Barley Wine. And White Shield. I started brewing it back here in 1999. It’s been brilliant, really – I can do what I like as long as I make money. Nothing’s changed since Coors bought Bass.”

Steve forbore from saying that White Shield was named 2006 champion bottle-conditioned beer by Camra, and that he himself was brewer of the year in 2004.

Steve and his fellow brewer Jo White aren’t producing the same number of barrels of Worthington White Shield as in its heyday, but demand is growing nicely, particularly as we rediscover the virtues of beer as tipple to go with food.

And then I found another glass winking at my elbow. It was time to forget about the ABV, the number of barrels brewed, the sales graphs, and even the thought that this beer might be as extinct as the Yangtze dolphin had it not been for the passion of Steve Wellington. It is time simply to close my eyes, drink deeply at the heady liquid, and let its mellow bitterness, refreshing, citrus wash and malty base roll over the tongue and glide down my throat. It was like being young again, only better.’

One thought on “White Shield Man”