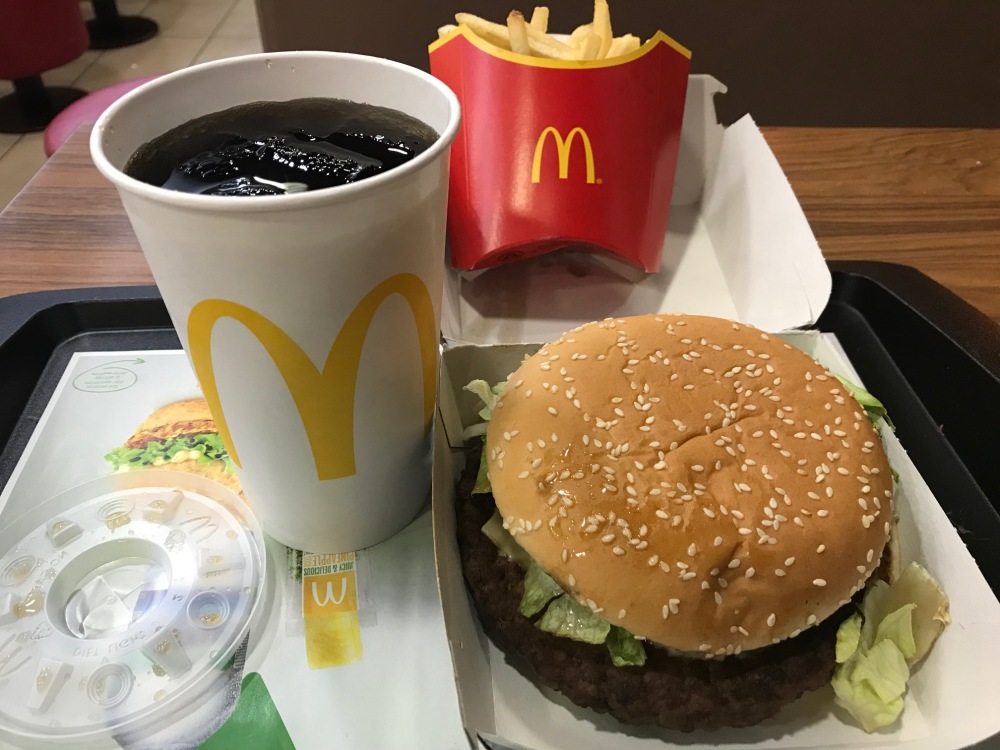 If a person can understand the joy of a McDonalds burger, he or she will come closer to understanding the mysteries of the universe. That’s my theory, and on that basis I treat myself to one each year.

Is there another food that is, at once, so remarkable, so extraordinary, so paradoxical? Here is a substance that fills you beyond the point of repletions,  and yet whose flavours are so delicate, so evanescence, so subtle that they defy analysis.

Let me take you element by element through the marvels of the Big Tasty that I ate as part of the Tasty Meal (burger, fries and Coca Cola) that I purchased for £6.69 at the Stroud outlet of McDonalds. It brought a whole new dimension to the word ‘tasty’.

By some miracle of technology, the whole magnificent construct was fused to the box in which it was served. Prising it off proved to be a delightful challenge that could have diverted a whole family for hours.

And once I started eating the gastronomic fireworks really began.

The bun appeared to combine the mesmerising textures of sponge and flannel,  and clung to my teeth with the tenacity of Velcro.

The most ardent vegan might have been hard pushed to identify the burger patty as being meat.

A few gallant slices of  something that had the appearance of tomato added a delightful faded pink to the ensemble, although whether the slices really were tomato or not, I couldn’t really say for sure.

Shreds lettuce were discrete to the point of oblivion, aside from a limpness that put me in mind of the late and much lamented Larry Grayson’s wrist.

A wafer  of a cheese substance leant a faint but nostalgic whiff of  evaporated milk to each mouthful.

As I ate the whole thing seemed to melt and fell apart. The centre could not hold. Mere anarchy was loosed upon the plate.

And as for the fries, they were a tribute to the  eerie powers of the food industry to turn potato into chips that bore an uncanny resemblance to compressed  cardboard.

All in all, it’s a modern marvel beyond comprehension that the food industry can produce something with the specific gravity of a breeze block and the flavour  … the flavour of … the flavour of… I’m damned if I can really say. The mysteries of the universe are safe for another year.

NB. Apparently  McDonalds feed 68 million people a day and sell 75 burgers around the world every second.